A Pain in the Neck – Lack of Education in Conservation

Recently, a Kentucky native and avid hunter sparked an outrage on social media regarding pictures of a black giraffe she harvested in South Africa after a local African media outlet, Africa Digest,claimed the following:

“White American savage who is partly a Neanderthal comes to Africa and shoot down a very rare black giraffe courtesy of South Africa stupidity. Her name is Tess Thompson Talley. Please share.” 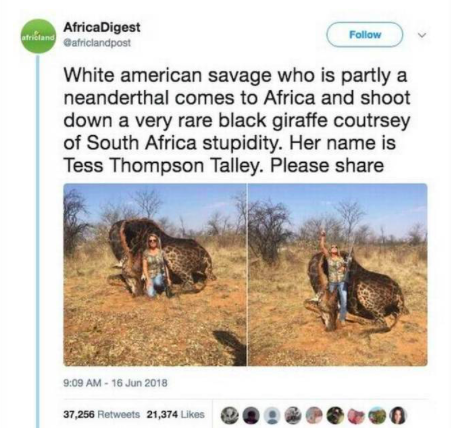 The Tweet received over 60,000 comments and 30,000 likes, most which were very negative in Talley’s favor.

Talley later revealed to Fox News, “The giraffe I hunted was the South African sub-species of giraffe. The numbers of this sub-species are actually increasing due, in part, to hunters and conservation efforts paid for in large part by big game hunting. The breed is not rare in any way other than it was very old. Giraffes get darker with age.”

A lack of education in conservation caused Talley’s trophy giraffe hunt to go viral; in reality, the giraffe had killed multiple, younger bulls who were able to breed, and the 18-year-old giraffe was not able to breed any longer. Therefore, by Talley’s efforts in killing the trophy giraffe, the population is able to increase.

Within the case of Talley, we are able to see the detrimental effects of a lack of education in conservation. People read one source they deemed as “reputable” and immediately formed a conclusion regarding Talley’s Trophy giraffe. Without any education in conservation, people viewed Talley as vile, heinous, murderous, and despicable. When in reality, Talley’s efforts will yield positive effects to the herd.

So what is your stance on Talley’s trophy giraffe harvest? Regardless of an individual’s personal choice in shooting or not shooting a giraffe, is Talley helping or harming conservation?